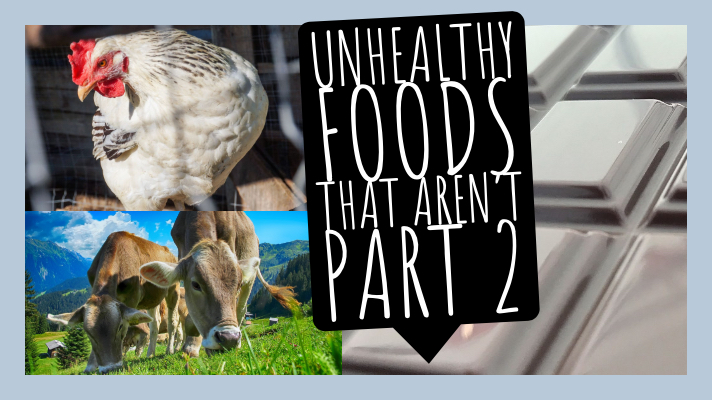 For the sake of completeness, I think I should finish this before writing a different article. Bear with me.

6. Dark Chocolate. When you eat dark chocolate, you are eating a gosh darn health food. Let that good news soak in. Here’s why. It’s packed with antioxidants, fiber, healthy fats, and most importantly, chocolate. As I write this, I am eating a delicious 90% cocoa dark chocolate bar with my coffee. The bar is big (100 grams), like the size of a legal letter. I may eat the whole thing. But Dr. Jimmy, what about all the sugar?  Easy, I’d have to eat 6 servings to get the sugar we get from one banana. Also it’s loaded with healthy fats, which helps offset the sugar content a bit.

Also chocolate is a fermented food. I’m surprised you didn’t know that. Fermented foods are generally super good for you and should be consumed regularly. If you eat processed milk chocolate like the kind in a Three Musketeers Bar (probably the weakest candy bar on the market today, in my opinion) then obviously these benefits don’t apply as you are getting a giant load of sugar in your mouth from the milk chocolate and the “whipped center.” Did anyone else ever think that the name, “Three Musketeers Bar” doesn’t really make sense? I did some research and found out that it got its name, because they used to have three candy bar flavors in one package. During WWII, manufacturers couldn’t get the ingredients for all the different flavors, so they just made the one flavor they could get. To save money they altered the recipe and added sugar to liquified elementary school gym mats to create the “whipped center” to fill the bars. The cost savings were so huge, they kept the recipe after the war. Here’s another fun fact. Only part of that story is counterfactual. Here are the ABC’s of buying chocolate.

7. Coconut Oil.  I just wrote about this in a rant about the American Heart Association.  I should have included this meme in the article. Here is the link.

8. Eggs. In the 1980’s eggs were put in the same health category as cigarettes, butter, and cocaine. Later, eggs were given a pardon and a media frenzy followed…

Thankfully the nutritional community has pulled its head out of its ass regarding eggs, and butter is also now getting some traction. Science has yet to go full circle and re-endorse the use of cocaine, but that’s a later post.

Despite being given the green light nutritionally, eggs have failed to be given the respect they deserve as one of the most delicious, inexpensive, and nutritious foods at our local mega-mart. It kills me when people order egg white omelets, which is a less healthful and less tasty version of a regular omelets. Ordering an egg white omelet is like fishing without beer. I suppose you’re still technically fishing, but I don’t see the point.

Most vegetarians don’t eat eggs, but they should. During medical school, I had friends who raised chickens as pets and regarded the eggs as a thank you present from their birds. They didn’t eat the chickens (they’re pets), but they damn sure ate the eggs. It’s like having pets with benefits. If that’s wrong, I don’t want to be right.

Eggs (specifically the yolk part) are high in omega-3 fats and protein. Also eggs have very little sugar, gluten, and high fructose corn syrup — none to be precise.

9. Cheese. Is cheese a health food like kale, eggs, or salmon? Probably not, but good cheese is delicious. Admittedly, commercialized cheese has it’s blemishes, but on the bright side, cheese is low in carbs and high in fat and protein. Cheese has a few beneficial micronutrients like calcium and is a great partner with veggies. Hard, organic, grass fed, and local are generally good adjectives to seek out when buying cheese, but not required. Also traditional cheese only has 4-5 ingredients, so keep an eye out for processed fillers and chemicals. Bad adjectives include: lowfat, government surplus, mystery, canine, American, and “not for human consumption.”

Is Kraft American “Cheese” good for you? Uhh, no. Also it’s not cheese. What about Velveeta, Cheez Whiz, EZ Cheeze, or that cheese that comes in Kraft Mac’n Cheez? Also not cheese. Always avoid “cheeses” that are powdered, spelled with a “Z,” or can be squirted out of a can, unless you are in a zombie apocalypse survival situation or very very drunk.

Lactose intolerant people can be sensitive to cows’ milk cheese, but usually goats’ cheese is OK. Lactose is the sugar found in milk. Because cheese is mostly fat and protein, it’s actually low in lactose and therefore shouldn’t be as intestinally disruptive as milk, yogurt, and ice cream.  I am sensitive to dairy and get a pretty bad rash from cheese, but only when applied directly to the skin of my inner thighs.

10. Beef. Here are some outrageous claims that you may not believe. Grass fed beef (GFB) is better for you than chicken. My junior high school shop teacher was caught on America’s Most Wanted. Peanuts aren’t really nuts. All of those statements are true, except for the one about my shop teacher, but he did bear a strong resemblance, and I am very sorry for any suffering that my anonymous tip may have caused #seesomethingsaysomething.

GFB is high in omega-3 fats, because grass fed cows eat grass which contain omega-3’s. As we’ve discussed before, we want a balance between our omega-3’s and omega-6’s in our diet. Almost every American has way too many omega-6’s in their diet, this imbalance is pro-inflammatory. Chickens are fed grain, even the organic ones.
Green leafy grassy stuff is better than grain. I’m going to get that last sentence tattooed somewhere.

Organic, sustainably raised chickens are fine on occasion, but the conventional poultry industry in America is a horror show, and neither organic nor conventional chicken can compare to GFB. Americans have drastically increased their chicken consumption since the low fat nutritional movement. This was bad for human health and even worse for the health and life expectancy of chickens. Meat is a healthful (but not required) food choice for humans. We are just doing it wrong for the most part. The more we demand responsible and healthful meat choices, the cheaper and more prevalent it will become. Sorry I got all preachy. To be clear, I never eat chicken nuggets, but I still eat regular chicken when I’m having Hooters Wings or a bucket of the Colonel’s Extra Crispy. I just feel bad about it, and now you can too.

In conclusion, I hoped to shed some light on a few delicious foods that aren’t considered healthy. All of which are more healthful and way better tasting than mainstream health foods like whole wheat bread, Nutri-grain bars, Cheerios, chicken breasts, orange juice, and bananas. I know that I tend to ramble. I will work on my brevity in the future. My website keeps track of how many people read these things, so let me take this opportunity to give a special thanks to those of you who made it through the entire list. I appreciate you both.

This site uses Akismet to reduce spam. Learn how your comment data is processed.

The only email sign-up that can lower your blood pressure.